JENNIFER H CLARK
The Great Divide
I began making art about death after my father died in 2008.  The experiences of caring for him and being present at his passing could only be processed by attempting to work out the form on paper and making them visible. Similar experiences followed in 2017 and 2019 with the passing of my mother and brother. These encounters brought me comfort but more questions to what may be behind them. I have found their deaths to be a connecting link to numinous realms. It was a gift I was not expecting.
​How does one express the inexpressible, the inexplicable ? Death can be a release but also present the unimaginable. The words that I find the most helpful are from Thich Nhat Hanh who, when learning about his brothers untimely and tragic death responded with “Nothing is wasted” Each life has meaning in itself and nothing can undo this. We each touch others in our lives in ways we will never fully understand.
These paintings look at death through the lens of personal experience.  At loss and grief through the passage of time and the mystery of presence and absence. 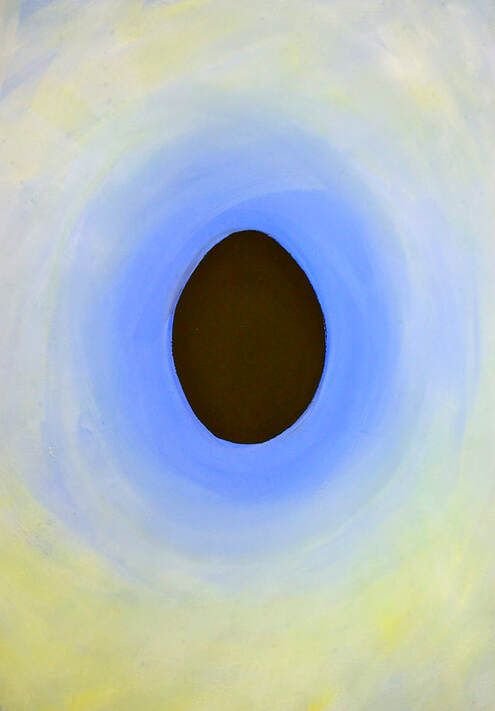 Into the Depths 11 " x 18 " Charcoal, gouache
This is the first image to appear after my father’s passing. Death is a dark finality and the mystery is witnessed. One is held in an ethereal blue light, part of the void and yet free of it too. It speaks to that impenetrable mystery in the interplay between light and darkness. 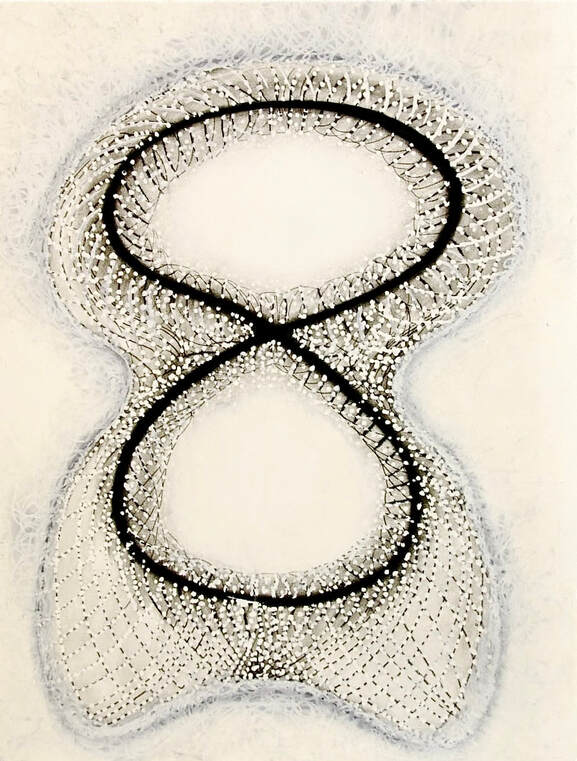 Death Light 26 " x 40 " Charcoal, gouache
When my father was dying, my mother and I were each by his side holding his hands. I became aware that we were in a kind of triad. He was his own island and we could not join him. Yet we were together in spirit and body , moving towards a finishing and connecting point that lay between us.  When he reached there, he would cross over into somewhere else. He reached this place and his breathing slowed to a stop .He became obscured in a cloud of sparkly lights. Only the starkness of black charcoal on the white emptiness of paper could begin to express the experience of feeling and seeing death approach and a life end. Where did the lights go?
Infinity Series        8 " x 8 "       graphite pencil on paper
Having no outer explanation for what I had experienced, I drew it repeatedly as a way of understanding what had happened. How can the portal between the living and the dead be understood? What are the processes involved in this passage? When does one stop and the other begin?
​ 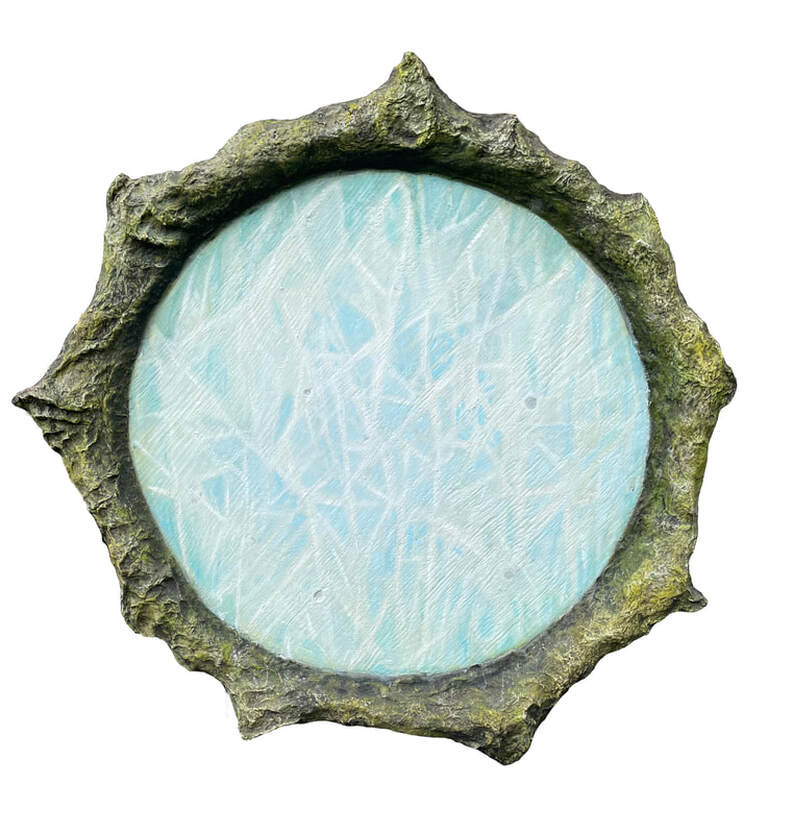 From Earth to Stars 30 " round Oils, wood, wire, papier maché
Life is a continuum from a mineral level on earth to the infinite beyond space and time 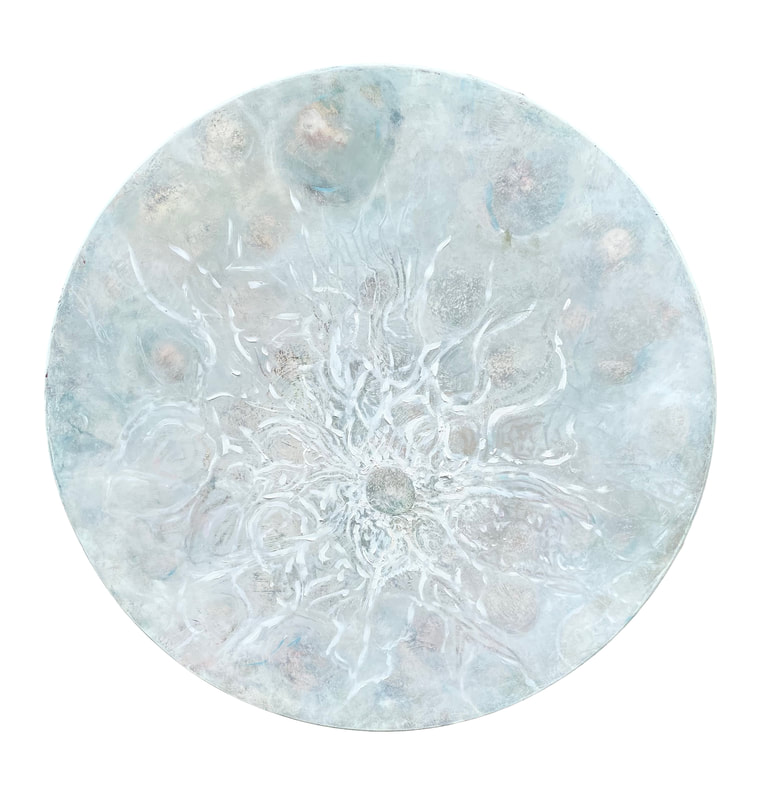 Soul's Release 20 " round Oil on wood

This piece is connected to my Mom’s death and the experiencing of her passing and subsequent cremation. While grievously sad at such an immeasurable loss, there was also a peacefulness at the natural flow of time for one who has reached a great age and is more willing to move on from their “ mortal coil “ . The essential self becomes clearer and more transparent as one approaches the end of life, and then where does that energy go? I was there at her passing and her cremation, and then walked in the connecting park while the smoke rose into the clouds. She was with me, and we both smiled into the sun.
​ 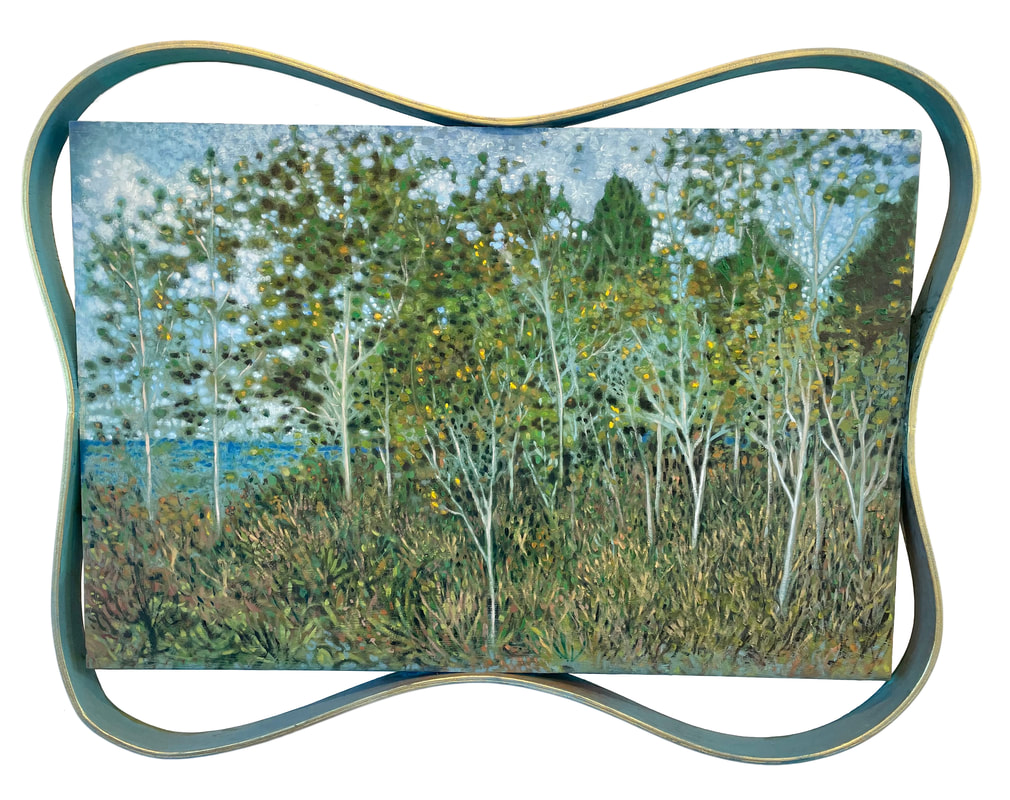 Summer's End 24 " x 36 " Oil on wood
This painting starts the next series looking at death and begins with the end of summer and the first signs that the time of flowering and growth is coming to an end. 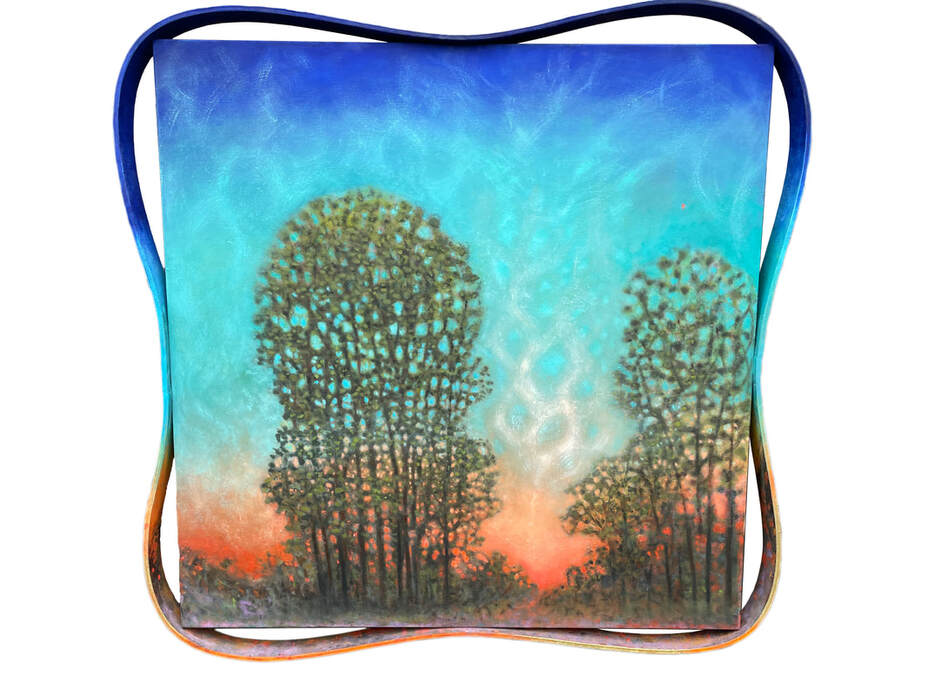 Dying of the Light 36 " x 36 " Oil on canvas, wood
What is it about perfect beauty that brings up in us a joy that can be so great as to also include a profound sadness?  As Dylan sings “ behind every beauty lies some kind of pain “ Our temporal life on earth echos this as we understand that we are mortal and that nothing lasts in its physical form. There is always that approaching night where the light is dimmed into darkness before another dawn approaches. A life well lived and ending holds both this beauty and sadness and each aspect becomes mingled to create great meaning for others left behind. How will you approach this coming to the end of the day? What memories and teachings will you leave behind? Will you go willingly or be filled with regrets? 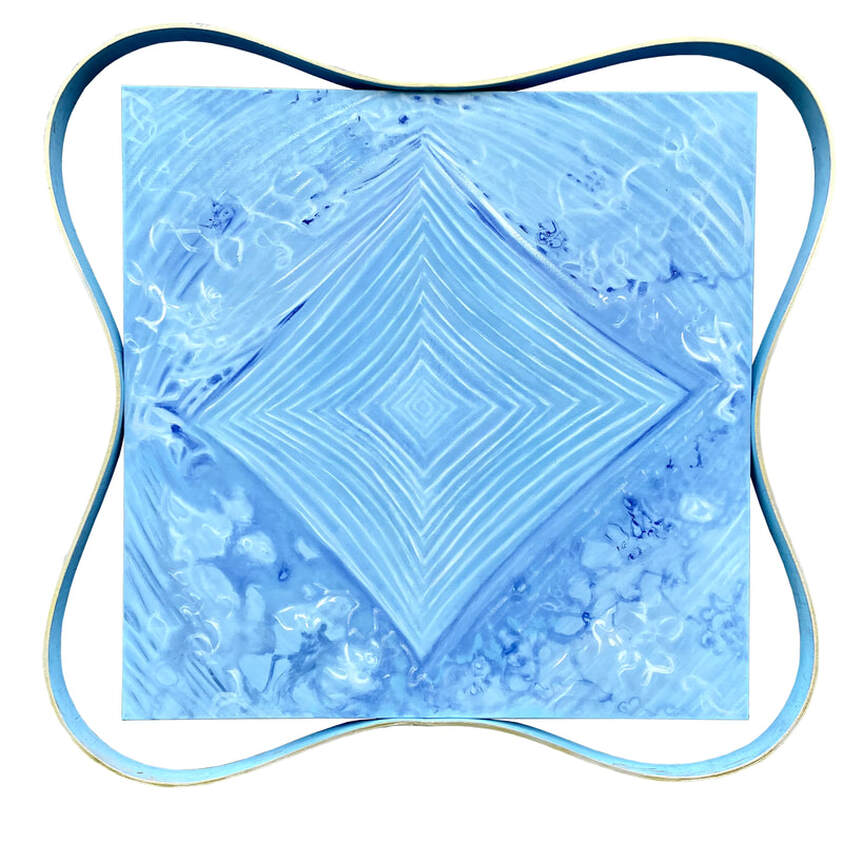 What links both birth and death is the centrality of the breath. The world both begins and ends with that movement of in and out, here, and not here, have come and now have gone. Is there a thin veil between states? Between, physical places, between worlds, between ideas, between ourselves?
​ 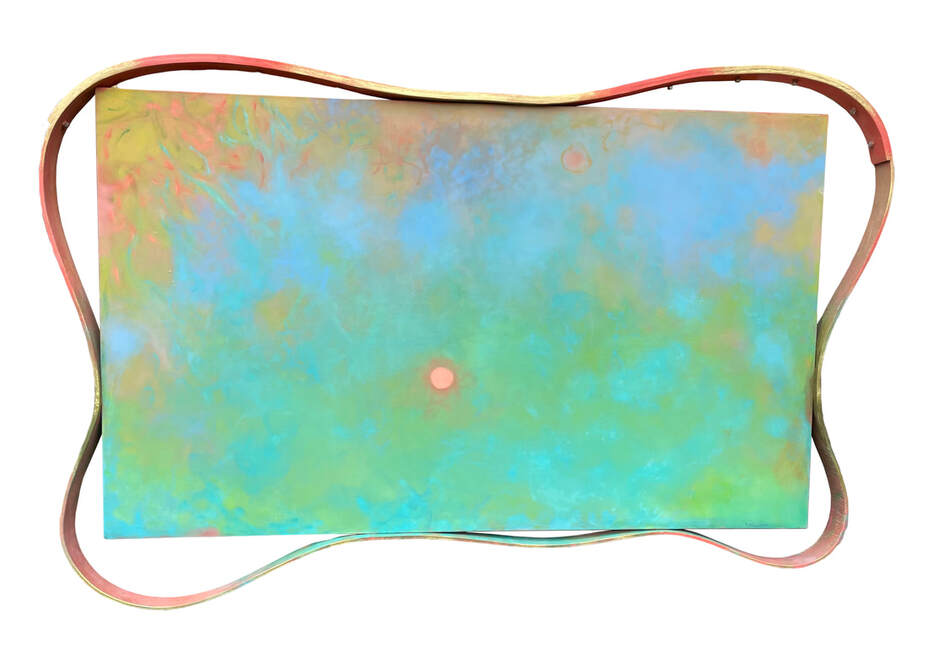 Up between the clouds and earth, in a world of strange beauty. 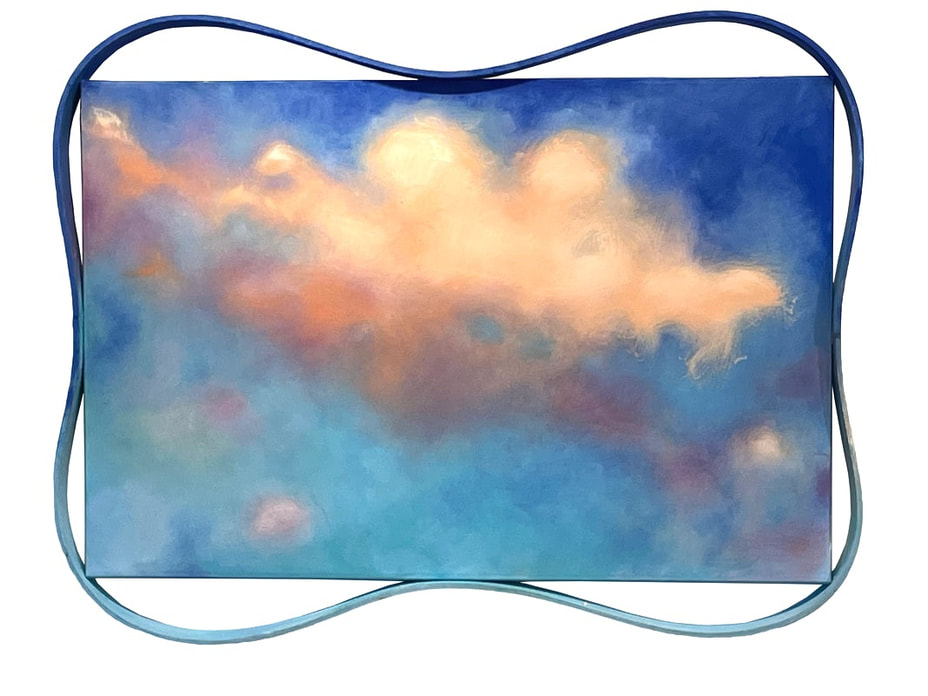 One Quiet Afternoon 24 " x 36 " Oil on canvas, wood
Death may be a release into the everywhere and everything, but most of all into pure joy.
​ 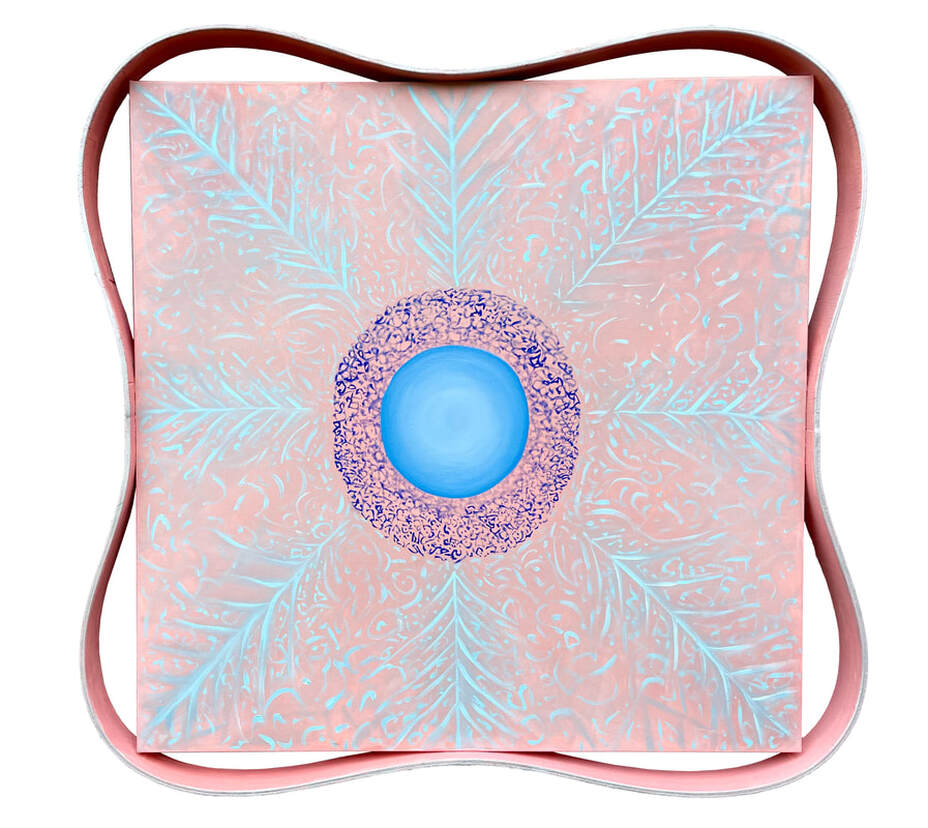 Rising 36 " x 36 " Oil on canvas, wood
“Love complete in the union of blue and pink, ice crystals and air, infinity ahead and all is clear”
This title speaks about a cremation. Transforming into ash within hours is not a deep and dark process of change in the earth but one of fire and air and possibly water too if you chose to be released into it. A transformation that is dizzyingly fast to understand. I took hold by feeling a joy that came despite the grief. I felt it through the sunlight that she loved so much coming down as she was rising up to meet it. 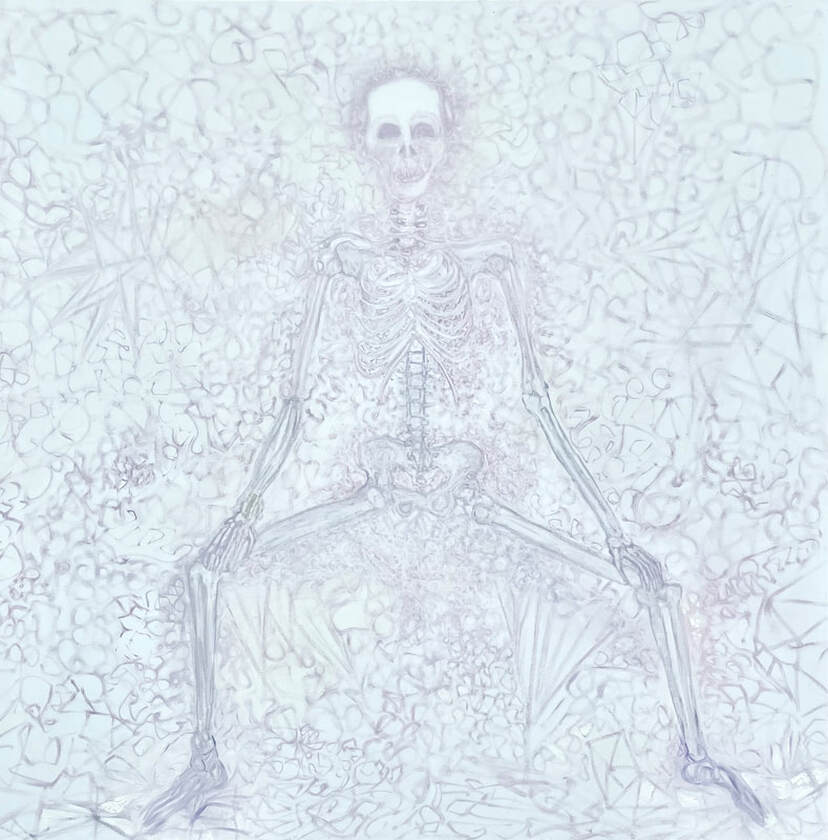 Bare to the Bone 48" x 48" Oil on canvas
It is said that it is important to contemplate one’s death frequently in your meditations to help one to more fully appreciate the sacredness and fragility of life.  To prepare oneself, or to make peace with and to understand and accept the natural processes of living and dying. How many of us think about our own death regularly or at all ? What is it like to do so ? 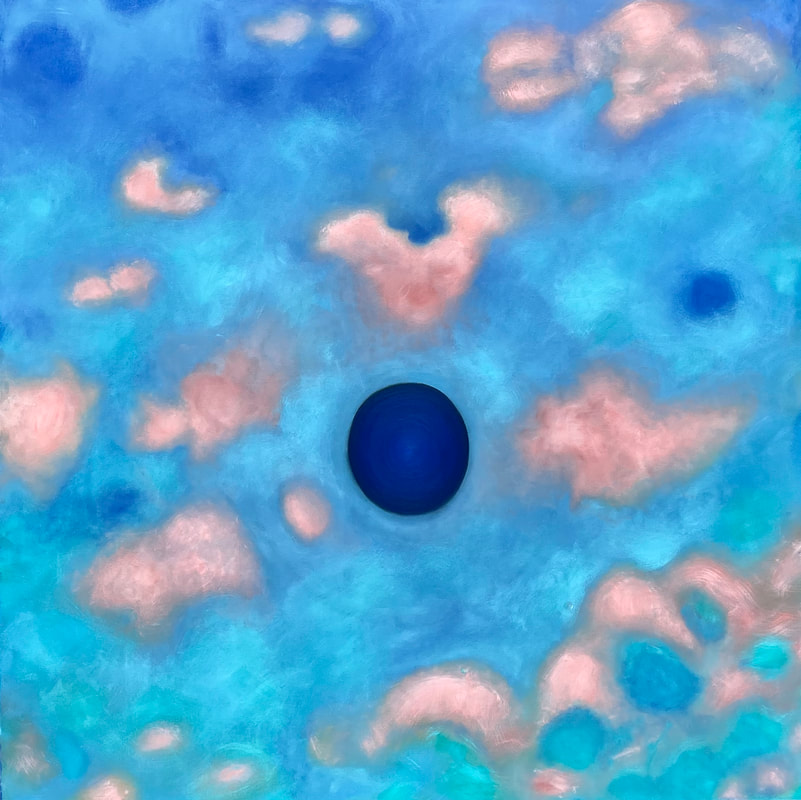 Such a Perfect Day 48 " x 48 " Oil on canvas
In sitting with death, one must come to the fear of death. This is thought to be a central force in our life both for good and for being  responsible for what holds us back.  How does death and the fear of it affect your life and how you live? 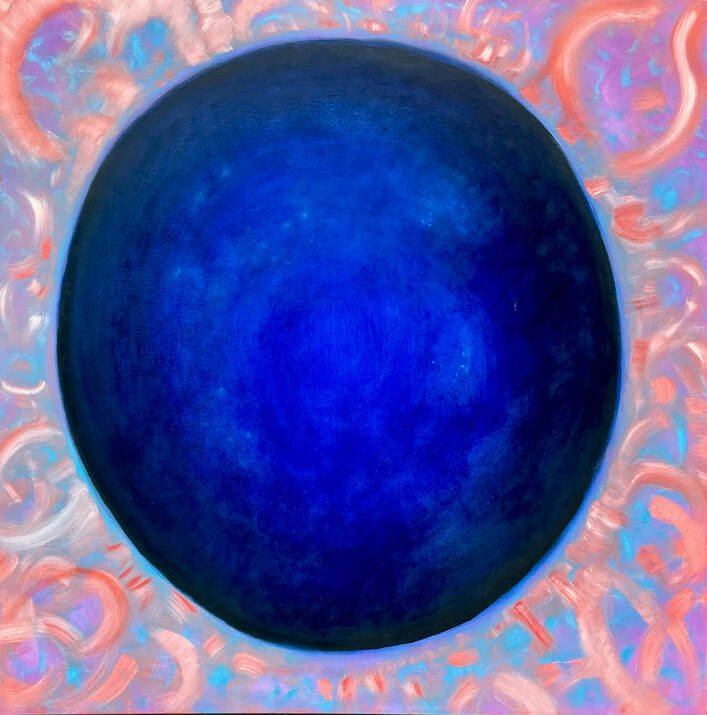 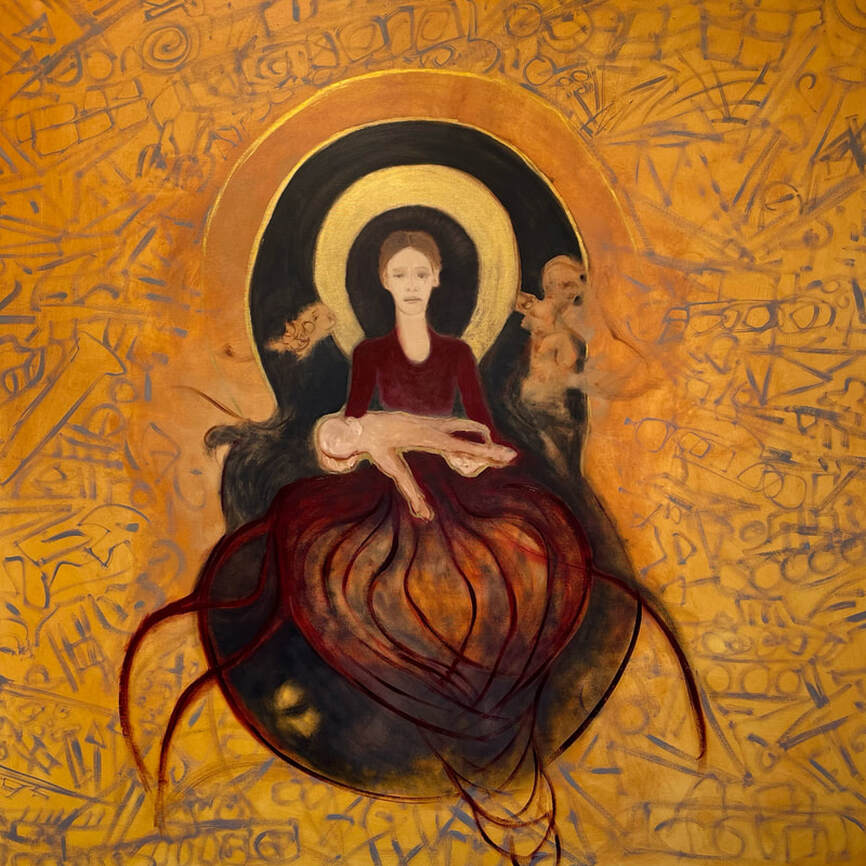 A maternity hospital in the Ukraine was recently bombed during the current Russian invasion and mothers and babies were killed. This is looking at this kind of death, death from violence. The powers of the military, the organized flow of weaponry and money, all crushing,  all surround her but do not defeat her. Despite her unspeakable grief, this Mother with her dead child are rooted in the earth and surrounded by the numinous, the sacred. Rage at the senseless and heartless carnage leaves it unfinished, there is nothing here to beautify.
​ 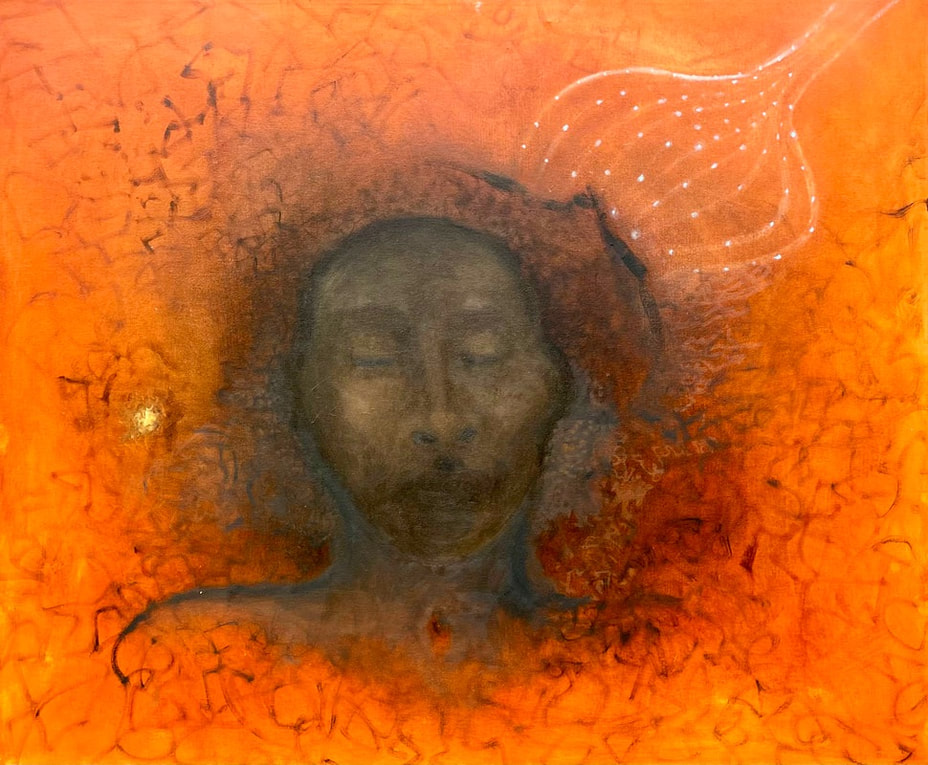 Death Dream 24 " x 30 " Oil on canvas
Thinking about death means contemplating the future, but here we are going back in time to one’s early ancestors. What was her experience at her time of death? When did we become conscious of death for ourselves?  How are we connected to our ancestors through death and time?